this is not a rehearsal, sheeple / this is Operation Too Many People / Wanting Too Much Stuff / the bail bond version of The World is Not Enough / because at the end of the day / the cost is WAY more than unlimited texts / a fancy new handset / it’s about limited natural resource to share / it’s the wind in your thinning hair / it’s muddy waters and smoggy air / it’s that polar bear / there / wobbling by on what’s left of the Larsen B / C / or D / or whatever / sweating in the unseasonably balmy weather / underfed, indisposed / balancing on the last of the floes / to melt beneath its hairy toes / watching as you pose with your extended family / at the end of a selfie stick / instagram slick & super quick / on the luxury deck / of the good ship Charlie Darwin / saying everything’s charming, charming / & wondering why attenborough was quite so alarming / but you only give it three stars on Trip Advisor / because you’re three thousand down and none the wiser / the weather was shit / you were sea sick / the dramamine didn’t take care of it / but anyway / hey / you’re basically okay / you’re an optimist at heart / I mean – where do you start? / nothing’s impossible / you’ve just got to be philosophical / it’s not as if none of this happened before / I mean – look at the dinosaurs / the original baby boomers / you can’t tell me they weren’t big consumers / admittedly mostly ferns and cones / in the more temperate zones / supersize meat eaters / on a scale / that would make whittingstall pale / running helter skelter / through muddy swamps and river deltas / leaping pronto back of a brontoburger / with a side order of allosaur / volcanoes and asteroids permitting / I mean – c’mon – they never thought of quitting / moaning about how hot it was getting / no – they clacked their jaws / and waggled their claws / and let dinosaurs be dinosaurs / I mean – when all’s said and done / the earth was always going to fall into the sun / so why not relax and have a little fun? / did you ever see that film from the 1950s / (bear with me on this, please) / the Incredible Shrinking Man? / I think / anyway / basically / it’s about this guy who shrinks – A LOT / because he sunbathes on his yacht / through a cloud of radiation / and without any explanation / finds his clothes are too loose / till he ends up sneaking around in a doll’s house / playing cat and mouse / with a cat / (true dat) / reducing in increasingly tiny increments / cleverly utilising household implements / until he ends up in a fight to the death / with a spider on a window ledge / on the prowl for spider snacks / but he catches it good in the cephalothorax / with a sewing needle / covering our resourceful indiveedle / in acky spider goo / but when it’s eat or be eaten, what d’you do? / then he walks outside through a vent / looks up at the starry firmament / and thinks about his existential position / in light of his chronically minimising condition / and he says: ‘The unbelievably small and the unbelievably vast eventually meet, like the closing of a gigantic circle’ / (or that’s what he says according to google)

films will always have something to say about this shit / take roland emmerich / cgi king of apocalyptic schtick / he predicted all this / with a cute, self-cleansing, Gaia kind of twist / (mark my words – we’ll be quoting from him / in years to come when the news is grim / already do – to give it some context / look at Chicago and the polar vortex)

for instance – my favourite scene from his oeuvre? / (a small thing, true but it hits a nerve):

Ian Holm is giving the team some broody looks / then he pulls some whiskey from out behind a bunch of science books / and you know exactly what adrian lester’s thinking / can this really be the last shit I’ll ever be drinking? / while / miles away / on that apocalyptic day / after tomorrow / on the way / to Balmoral / a fleet of royal helicopters start popping & dropping / rotor blades stopping / the pilots so many helmeted icicles / airworthy as a frozen bicycle / while inside, unseen / poor Elizabeth, our very own snow queen / is suddenly just so much royal frosting / illustrating what climate change was really costing

because trust me – EMMERICH KNOWS / how the world is only just so / until uh-oh / where’d it all go? / the greenland ice sheet & the Tibetan plateau / the indus & the ganges / vanisheees / c02 & methane exponential / rains torrential / wildfires residential / territorial & water wars potential / while the politicians & presidents / & sundry other residents / get it too late / why attenborough was so awesomely great / why he’d shake his head and close his eyes so sadly / and talk about how we were fucking things up so badly

but – my bad / there’s always comfort to be had / in blinkered denial / waving our hats rodeo style / as we ride flaming into the chasm / on the poor earth’s dying spasm / this shrink-wrapped, oil-tapped, carbon clapped / flaming cinder we called home / it’ll be alright – now leave me alone 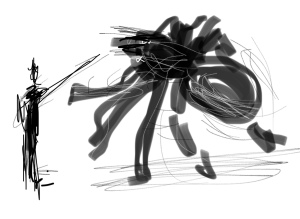