the ants are busy cleaning up / the sugar round the coffee cup / the bin bags back of the catering truck / the frosting lost from the tossed / wedding cake / of the fraught call taker / the overworked undertaker / the butcher, the baker, the fake news operator / the supermarket clown with his pants falling down / throwing plastic flowers around / while the lines / of shocked shoppers / the pantomime dames and party pill poppers / the princes, paupers & live-feed gawpers / talk about the healing power of music / steroids, benzos & antibiotics / antipsychotics / while Donalds Duck & Trump / hiding in plain view top of the dump / struggle with their waterproof pumps / red, white and blue sou’westers / finally acknowledging a change in the weather / and Doctor Doonothing / shakes his head as he pulls out your stuffing / huffing & puffing / muttering some bullshit voodoo / invoking a push me pull you, fuck me, fool you / who knew? / but the effect is immediate / and hey – you paid for it / so put that in your feed and smoke it / along with that other meme / the one about the Garden of Eden / where a giant snake / more give than take / so fat the branch’ll surely break / slowly unfurls / swinging low to lick Eve’s curls / waggling comedy eyebrows / at the luscious apple hanging solo / so low / but no worries – Eve knows / always has, I suppose / she eats the snake, tosses the apple, wipes her hands & goes / cutting to a vista / of all the other shit we missed / the fossilised fish in the shale and schist / impressions of all the creatures we lost / their curly horns poking through the permafrost / the sad rise and wreck of it all / so bad even Attenborough’s blocking your calls / he knows you can’t be trusted / he knows when the floes are finally busted / and the dead rise up to be costed / you’ll be parked two abreast / on what’s left / of the inundated / demarcated / cemetery hard-standing / with as much understanding / of what just happened / as that flattened / and battered / halloween pumpkin / gaping, waiting for something / anything / an end to the rain / an end to the pain / a storm of fireworks to light the sky again 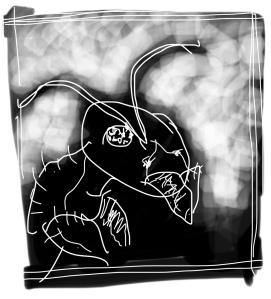