About as enticing as Diarrhea & Vomiting. I’m being melodramatic, of course. The thought of it is always worse than the thing itself (unlike D&V, which I’d say is the exact opposite).

But like chores the world over, once you’ve run out of excuses, and through bad planning or bad luck you suddenly and unaccountably find yourself with the time to do it, then actually – it’s not too bad. A bit like going to prison. Don’t think about freedom. Keep your head down, your nose clean, and do your bird (which I’m pretty sure is prison slang for rubbing down).

All of which is to say that I’m not a fan.

The paint store we go to is on a small industrial estate on the outskirts of town. We make a special journey here because last time the woman who served us was so nice and helpful. It’s been a while, but that’s the thing about good service. It stays with you.

It’s the hottest day of the year. We stand outside the paint store, reading the notice.
One customer at a time. Wait to be let in. Wear a mask.
So we wait, slowly cooking on the concrete walkway. There’s no shade to be had, and we can’t go back to the car and shelter there because we’d lose our place in the queue.

Eventually, a customer comes out and we’re waved through.
‘Nice and cool in here!’ I say to the guy who let us in.
‘No it isn’t,’ he says. I laugh, but I’m not sure why.

He doesn’t acknowledge us, but strides back behind the perspex shield in front of the till, where he plants his arms right and left and then stares at us over his mask, like a giraffe about to drink at a waterhole but unsure whether we’re logs or crocodiles. He doesn’t say anything else or make any other sign. We go up to the till.
‘We’ve come to buy some paint for the kitchen,’ we say.
‘Well!’ he says, slumping deeper between his arms. ‘It’s a paint store.’
Kath tells him about the colour we want for the kitchen. She points it out on the colour chart. Tranquil depths. It feels wrong to say it out loud. Like we’re being ironic.
‘What sort of finish?’ he sighs, looking over our heads. ‘Matt? Eggshell? Soft Sheen…?’
‘Matt,’ says Kath.
‘No you don’t,’ he says. ‘Not for a kitchen. One wipe and it’ll come off. You want Satin.’
‘Okay! Satin, then!’
Kath hands him the drawing of the kitchen we made, with all the dimensions. Last time we were here the woman had worked out how much paint we needed in no time at all. Made it seem fun, like a game. This time, the guy stares at us, then down at the drawing, then at us again.
‘I bet we’re the kind of customer you dread,’ I say.
He drops his chin and looks over his mask at me, Billy the Kid sizing up the cowboy who just insulted his horse.
‘Honest answer…?’ he says.
‘Yes!’ I say. ‘I like a bit of honesty.’
‘Yes, then,’ he says.
I laugh. The shop seems a degree cooler. I look around, wondering where the nice woman is. I’m worried she’s gaffer-taped to a chair out back, rocking from side to side, desperately trying to warn us.

The man taps out the figures on a calculator. It looks like a toy, big enough to drop on the floor and dance on. Which he looks like he’d much rather do. With his heels.
‘Five litres,’ he says, tossing it to the side. ‘So that’s what you want, is it? Five litres of Tranquil Depths?’
‘Thanks. That’d be great.’
He shakes his head, turns and goes into the back of the shop, about a thousand miles, to the mixing machine there. He jabs a few buttons, waits a moment, walks back.
‘We haven’t got the base,’ he says. ‘I could order it.’
‘How long would that take?’
He shrugs.
‘Maybe Wednesday,’ he says. ‘Maybe longer.’
‘Yeah – but – the thing is, we need it now. I’ve got the time off work.’
‘You could always try the paint shop the other side of town,’ he says. ‘Five minutes away.’
‘I’m sure there’s some other colour we could use. I’m not married to Tranquil Depths.’
Kath unfolds the paint chart.
‘What about Cornflower Bunch? That’s not far off Tranquil Depths. Can you do us a Cornflower Bunch?’
It doesn’t look like the kind of bunch he wants to give us. He shakes his head.
‘Same base’ he says.
‘Would it be quicker if you said what colours we can choose from?’ I say.
He turns to look at me, his head tilting a little to the right, as if just that small movement was all it took to slacken the bolt.
‘We’ve got about a million bases,’ he says. ‘You want me to go through them with you?’
I feel like saying yeah – but you didn’t have the base we wanted, though, did you? but of course I don’t.
‘No!’ I say. ’You’re alright!’
‘I’m guessing it’s the lighter tones that need that particular base,’ says Kath. ‘What about Blue Babe? I think Blue Babe would go? Do you?’
She shows me the chart and points.
‘Yeah. I could live with Blue Babe. Definitely,’ I say.
The man stares at us, neutral as a camp guard.
‘Blue Babe,’ he says. ‘Five litres. Satin.’
‘Yep. That’s it. Fingers crossed. Blue Babe.’
It makes me think of Who Wants to be a Millionaire. That anticipatory shiver of music falling to a general thrum, pending the answer. But if this is WWTBAM, Chris Tarrant is having an off day.
‘Yes. I can do Blue Babe,’ he says.
‘Great!’ says Kath. ‘We’ll take it!’

And we look at each other, flashing our eyes.

We’ve yet to ask about ceiling paint. 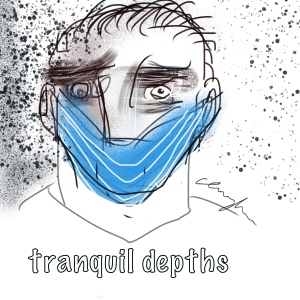