2. The DOG shall lie down with the FROG / in a swirling, whirling, generally very concerning kinda fog / and if there existeth too a log, you’ll have a helluva job to see it / and the DOG shalt end up doing something stupid I guarantee it

3. A dead CAT shall be found / by a horrified usher doing her rounds / with rigor-mortis, paws up in the auditorium / and the subsequent post-mortium / shall describe death by fatal feline megapplausium

4. A SQUID shall be revealed in a public aquarium / working the till, stocking shelves and managing all matters pescaterian / selling squid-themed t-shirt merch / without it moving an inch from its perch / which you’d have to say is pretty cool / given the general availability in the local labour pool / but as a rule / that’s fairly typical of your average cephalopoda / they’ll sucker the shit out of any staff rota

5. A LOBSTER / shall do a deal with a red-faced, Russian mobster / called Aleksander Crabsov / and when Aleksander shalt unexpectedly call the deal off / the LOBSTER shalt flip its shell and nip his nuts off

6. A KANGAROO shalt go into business with a PLATYPUS / making fat, natty scatter cushions / but the business shalt have unexpected repercussions / when the PLATYPUS enters into secret discussions / with a certain Russian / by the name of Aleksander Crabsov / who – hats off / overcame his recent testicular tragedy / to pursue his activities internationally

7. A TORTOISE shall find itself entering the regional caucus / even though it does not in any way knoweth / what a caucus is and how much it bloweth / (for your information / I just Googled caucus for an explanation: it is “a conference of members of a legislative body who belong to a particular party or faction” / so – no wonder the TORTOISE had such a nonplussed reaction)

9. A woman named Monica / school janitor / accomplished broom operator / shalt suffer to see a hideous MONITOR LIZARD / sitting on a computer with a mouse in its gizzard / and Monica shalt curse most grievously hard / and run broomlessly out into the schoolyard / but the MONITOR LIZARD shalt pursue her / as happily as if he knew her

11. A STORK / shall cause an inordinate amount of talk / dining in the clubhouse with a knife and fork / and the waiters shalt stare / and rudely watch him eating there / and the STORK shalt rise and cause further consternation / when he tries to attract the waiters’ attention / by smiling and stroking his face with a quill / (which is accepted STORK code for getting the bill)

12. A MOUSE / shalt enter negotiations to buy a fine and fancy townhouse / for a million pounds or thereabouts / quite where he finds the collateral, I have no idea / he’s probably an influencer on social media

13. A DODO / shalt come out of hibernation, look around and say oh no 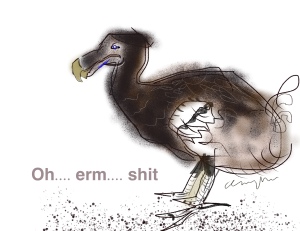