St Peter / the last, great meeter & greeter / zips up his perfect windcheater
to the dimpled point of his silver-haired chin / getting ready to let the next one in

He yawns / (he’s been up since about a million dawns) / watching them trail across the lawns
he waves his clipboard / an angel strums a heavenly chord / God I’m bored
he thinks / drinks / from a goblet / takes a bite from a bar of everlasting chocolate
this way! he says / ready with his quiz

St Peter glares down / frowns / flicks through the list / Jane the podiatrist?

Yes! she nods / What are the odds? / Me hobnobbing with the gods!

God – singular – I think you’ll find / unless you’ve got some other place in mind?

Me? No! This’ll be great / judging by the fancy gate

Hmm says St Peter / stepping back a good half metre
Podiatrist? isn’t that feet? / sounds a little bit too downbeat

Is that right? is that right? / says SP, scrupulously polite / fine….okay / so what brings you all the way here today?

Nothing, shrugs Jane / well – a sudden pain / endless night / a blinding light / a pretty wild kinda flight / why – is that alright?

St Peter slowly lowers his board / he’s been here so many times before / things have moved on since the days of yore (whatever yore is) / the thing is, he’s a bouncer who knows where the door is / and he’s pretty damn hot / about who gets to come in or not

But I spent my life caring for people / and what was that shit about camels and needles?

Yes, yes, says the elderly saint / how quaint / but that was just a fairy story / it was never based on sound economic theory / look at this place! these clouds aren’t cheap / I’ve got overheads that’d make you weep

Wow! says Pete / that’s pretty neat! / thanks!
Compliments of the bank! / says the man / shaking his hand / now – if you’d kindly show me the line / where you’d like me to sign…

A cherub floats down, gives his curls a flick / opens the gate with a cute little back kick / The banker chuckles / cracks his knuckles / tips his hat / dissolves into a cloud just like that

So what happens to me, then? says Jane

St Peter looks down at her again / Jesus Christ! Jane! Do I need to explain? / Podiatrists go to hell / with all the other HCPs as well / the nurses and scientists / gardeners and  pharmacists / ODPs and dieticians / drama therapists and audio technicians / the porters and the hospital sparks / the paramedics and record clerks / I’m sorry Jane, but that’s all there is to it / you had your chance to make some money and you blew it / anyway, I’m sure you’re used to that shit / the NHS was ever a fiery pit

But heaven… says Jane… who gets to go?
Trust me, yawns Pete / you don’t wanna know 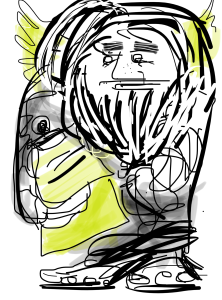