It starts as an itch. A scratch, and another itch, and another scratch. An irritating prickle I  chase absentmindedly from site to site – from the centre of my forehead to my ear to my neck to the back of my shoulder, my knee, my calf, the crook of my elbow, back to my ear again. Followed by a sneeze. Then another. And another, the last one after massing ominously on the horizon like a great, big, sneezy tornado. And then a rash. Sprouting on my forearm like a clump of tiny mushrooms after the rain. So bad I have to hunt through the medicine box for an out of date Piriton tablet – which immediately turns me into a zombie. A zombie with an itch. And there’s only one conclusion I can possibly draw from all this.

How can anyone be allergic to anything so cute? An allergy to spider bites – fine. An allergy to dust mites – well, okay. But Stanley? An animal so innocent that when he turns his long muzzle in your direction and fixes you with those sad, button black eyes you just want to drop to your knees sobbing and confess all your sins. That Stanley?

‘You could take a non-drowsy antihistamine,’ says Kath, Googling for advice.
‘I’ve tried that. It doesn’t do any good. You may as well swallow a lo-fat sweetener for all the good that does.’
‘You could get one of those scratch tests. You know – where they put different things on your skin to find out which ones you’re sensitive to.’
‘I think I know it’s Stanley. When I stroke him, then scratch my shoulder, it comes out in a paw-shaped welt.’
‘It probably is him, then. So – I suppose – one of you will have to go…’
She smiles at me without finishing the sentence.
‘I’ll pack my bag,’ I say, standing up.
‘Let me text my friends first and see if they’ve got any ideas…’

It’s not a full-on anaphylaxis, but still – the whole thing’s a shock. The only sensitivity I’d shown to the animal kingdom up to that point was crying when Will Smith killed his dog in I Am Legend.
Although – that’s not quite true. I’m pretty sensitive to mosquitos. Mosquitos have really got my number. It’s probably on some insect app, a bit like Waze, except for biting. Whatever it is, they always come straight to me, wherever I am, whatever I’m wearing. And when they jam their pointy snoots up to their eyebrows through my epidermis, I swell up at the site like a balloon on Labour day. Apart from that, though, I’ve always been pretty good with the natural world. So it’s a surprise that I’m sensitive to Stanley.
‘Could be his dander,’ says Kath. ‘Could be his urine. His saliva. The whole damned dog. It’s hard to know without a test. You can get shots to build up an immunity – but we’ll have to wait a while for that. Another thing we can do is hoover more often, maybe get an air purifier for the sitting room.’
‘I’ll do anything,’ I say, scratching my arm, my ear, my neck. ‘Otherwise I’ll be camping outside for the next ten years.’
‘Let’s try the air purifier first…’

The air purifier is about the size of a two litre can of paint and sits on the floor by my chair making reassuring whirring noises. There was another, more beautiful model on the market, something tall and elegant and futuristic, like a time tunnel in the shape of a giant needle’s eye. Not only did it control the temperature and filter the air, it sent all the allergens and dust mites back in time a hundred years. But it was out of our price range, so we went with the can of paint instead.

I’m impressed at how quiet it is, though, and the blue light at the top is soothing. It feels like something’s happening, which is probably half the battle. Stanley doesn’t seem to mind it. He looks at it with the same, slightly disappointed look he gives everything else.
‘The important thing is to break the itch/scratch cycle,’ says Kath. ‘The more you itch, the more you scratch.’
‘It’s hard when it’s so delicious.’
‘Faye says you should try tapping.’
‘What’s that?’
‘It’s easy. All you’ve got to do is tap certain meridian points and say out loud I accept myself as I am and let all my anxiety and insecurities go – and you get over the allergy. And everything else, probably.’
‘I don’t feel anxious about Stanley. I just feel itchy.’
‘It’s more about your whole life.’
‘But I wasn’t itching before we got Stanley.’
‘Don’t shoot the messenger. Anyway – I’ve ordered some sprays, as well – to treat the bedding. And don’t keep letting Stan upstairs.’
I look over at him.
‘Oh, Stanley!’ I say. ‘Why can’t life be straightforward?’
He grunts and puts both paws over his ears. And if I wasn’t scratching so much, I’d do the same. 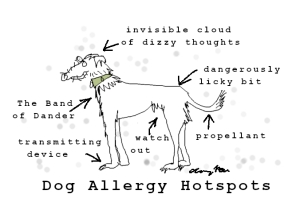