The Spaniel – Tunnelling for Beginners – Whose dog is this? – Him or Me – Aeronautics for Hounds

There’s a dog we see on the walk sometimes. Or – not so much see as experience. It’s a spaniel. I think. It’s actually hard to tell, because the moment it catches sight or scent of Stanley, it leaps a foot in the air and explodes into a mad cloud of fur and teeth and howl. Incredibly, it’s the one dog Stanley doesn’t react to. It’s as if the dog is crazy enough for both of them. The owners walk The Spaniel together, in the same way that maximum security prisoners get two guards round the exercise yard rather than one. And no sooner has he launched himself into his terrifying impression of a fire tornado, they huddle round him, shielding him from the thing that set him off, whether that’s a dog, a jogger, a cyclist, a van… I don’t know – a snail would probably push him over the edge.

Needless to say it makes me – and Stanley – feel incredibly smug.
We swap glances.
‘What a carry on…’
‘Some dogs…’
‘Some people…’
‘You’d think they’d show some restraint…’
‘Perhaps we should give them Adina’s number…’
(Although even Adina would struggle giving The Spaniel a treat without him being wheeled out of ECT in a strait jacket).

Lola has started escaping from the garden, and we think it’s part of a campaign. About Stanley.

We thought she’d accepted him. When we caught them sleeping on the sofa together, it felt like we’d turned a corner. And even though Lola still curled her lip when Stanley tried to steal her chew, mostly they seemed to be rubbing along together pretty well.

The garden is one of those long, thin, suburban affairs, a wooden fence on the left and a juniper hedge on the right. The hedge eventually gives way to an apple tree and a loose attempt to disguise a lot of hardcore as a rockery. It’s the obvious weak spot in the garden’s security, so we’d cobbled together a kind of fence to keep the dogs safe. Plus there was a holly tree and a pyracantha shrub tangled in with it all, which was as good as barbed wire.

So it was a surprise when Lola started turning up next door.

I couldn’t figure out how she was doing it. I could only imagine she’d been working on a tunnel since the day we brought Stanley back from the centre, patiently paddling out a bit of soil at a time, carefully disposing of it in the drive, then covering the entrance up with a door made of grass and twigs. She’s such a clever dog, I wouldn’t be surprised to find a whole trolley system down there, with candles in old tin cans and some bellows made of stolen pillows for ventilation. But as hard as I looked, I couldn’t see any way through the hedge or the fence to next door. And the trouble was, next door had no gate between the garden and the main road.

One morning, around half five, Kath’s phone lit up.
She groaned, rolled over to see what it was.
‘Oh my God!’
‘What?’
A post on the local gossip page (a bit worrying it’s one of her alerts, but this wasn’t the time or the place to talk about it). A photo of Lola standing defiantly at the top of the road, the wind in her ears. The caption read: Whose dog is this?
Apparently, they’d tried to catch her but she’d given them the slip.
The next thing we knew, there was a single bark at the front door. It was Lola. She gave herself a little shake and came trotting through, and the subtext was clear: This will keep on happening until you get rid of Stanley. It’s me or the lummox.

There was nothing for it but to put the pet flap on and keep them both inside till we’d sorted out the problem.

On my next day off we hacked back all the undergrowth down there. Bought a roll of chicken wire, knocked in some posts, and did everything short of hiring guards to make sure Lola couldn’t get through. Even The Spaniel would’ve burn itself out trying to get through that lot. But Lola? She quietly watched us while we worked, from a distance, her paws crossed so innocently and thoughtfully it was obvious she was planning something, sketching her calculations in the dirt.

She really is a smart dog.

I wouldn’t be at all surprised to see her in a few days, leaping off the roof in a hang glider improvised from a clothes horse and the fleeces from her basket. 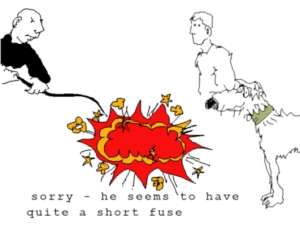